skip to main | skip to sidebar

by Chris Shirtcliff , Certified Creative Journal Expressive Arts Consultant & Certified Visioning® Coach
Phone (413) 323-6653, Belcherton, MA
email: cfssmain@charter.net
website: www.thecreativedoorway.com.
I made this collage while contemplating stepping down from my executive hospital administrator role. Many life changes would be necessary to make this possible. There were three components. The bottom of the collage for each section had current images that evolved to the top images of where I wanted to be. 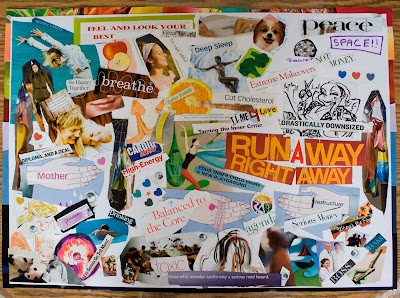 First of all I needed to launch my adult daughter who was just graduating from art college. The most fascinating part to me was the picture of a young woman holding her hands up triumphantly at the water’s edge. I thought this had to do with the fact that she lived a few blocks from the Atlantic Ocean. Instead, it materialized as a triumphant moment on the Pacific shore as she celebrated having ridden her bike cross country. She was part of a support team for a man in an electric wheelchair on a ventilator rolling across America to raise money and awareness while seeking the Guinness World record for this feat. It took them four months. She is now working in her field, taking a lot more responsibility and nearly financially independent.

The second component was my health. I do eat a more balanced diet, find time for play to de-stress, and don’t get sick as often. I had eye surgery to improve my vision. Weight loss and being more active still need attention. Curiously, my husband has really taken charge of his own health, hitting the gym almost everyday. His health, of course, increases our ability to be active. Friends who see me lately say that I look ten years younger. So I have probably made more progress than I realize in this arena.

The third component was all about actually changing jobs. I began exploring options shortly after completing the collage. A year later I had worked out an arrangement with my employer of 33 years. I stepped down as the hospital president, had a three month paid leave, and then returned to work part-time. I work three days a week as a Professional and Organizational Development consultant focusing on educational collaboration for the same health system. I am also formalizing my Creative Journal Expressive Arts and Visioning® Coach consulting business and offer monthly workshops. We are still adjusting to the lower salary, but refinanced our home for some added financial security. During my leave I took a weekend voice workshop and have recently begun Spanish lessons.

I found it amusing that the phrase “Run Away Right Away” underwent some change in transport. Letters fell off making it “Run Away Right”. I thought this represented my very well planned transition. When the plan was in motion, another word fell off. Then it said “Run Away”. About that time, I did!
Posted by Lucia Capacchione, PhD, ATR at 5:52 PM

Lucia Capacchione, PhD, ATR
I am a registered art therapist and bestselling author of 22 books. I certify others in methods I originated through my Creative Journal Expressive Arts Certification Training and Visioning Coach Training. I am best known for the The Creative Journal Method, for pioneering Inner Child work, and brain-mind balancing through using the non-dominant hand for writing and drawing.